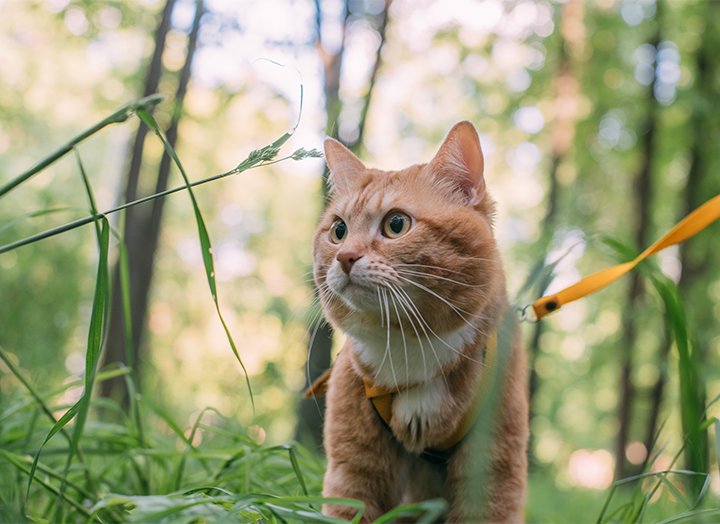 Aches, pains, and discomforts. As we age, these feelings all become more familiar and unfortunately the same goes for our four-legged feline friends.

Arthritis, a well-known health condition, is very common in our aging pets, but there are things you can do to ensure your cat is still living its best life possible. From orthopedic furniture to supplements you can use to boost their meal bowl, here’s how to help your cat with arthritis. Why do cats develop arthritis?

Just like us, cats are prone to arthritis. They have cartilage between their bones in their joints which helps to soften the impact as they jump and move around. As they grow older, this cartilage can deteriorate, causing pain and inflammation. While age is the most common factor behind arthritis in cats, there are other things that can influence this disease.

Pets who have experienced an infection or injury are more susceptible to arthritis where the damage occurred. Since they’re natural climbers, falling every now and then is inevitable and contrary to popular belief, they don’t always land on their feet. Although these little tumbles seem harmless, they can lead to soft tissue damage and eventually arthritis.

Felines that are packing a few extra pounds are also more prone to arthritis due to the added weight on their joints. A healthy weight should be maintained to not only avert things like joint issues but heart disease and diabetes, too.

It is important to note that certain breeds are known to develop the condition. These include Persians, Himalayan, and Siamese. Luckily, breeders will often rule out any hereditary conditions in their bloodlines before planning a litter. According to PetMD, most cats are diagnosed over the age of 10, but it’s likely that arthritis started much sooner than that.

How do I know if my cat has arthritis?

Since felines instinctually hide their pain, uncovering cat arthritis symptoms can sometimes be a challenge. This is why it’s a good idea to keep a close eye on their health.

ASCPA says that if your cat has arthritis, you may begin noticing signs of reduced mobility, lowered activity throughout the day, and other changes in behaviour. Cat arthritis symptoms may vary from pet to pet, but some signs to look out for are::

Senior cats who are already naturally less active can make detecting these signs a bit more difficult, so it’s important to stay in touch with your holistic veterinarian to ensure an accurate diagnosis. 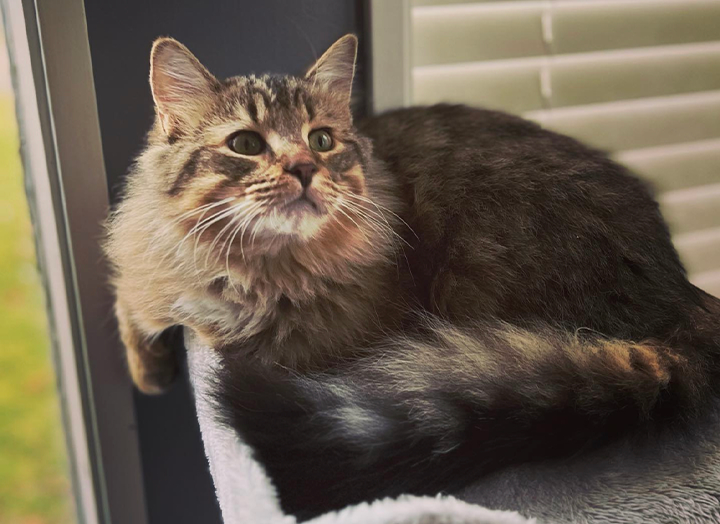 When it comes time to decide on which cat arthritis supplements to bring home, we recommend trying one of our Bold by Nature+ Supplements. We offer two supplements that support bone and joint growth in your pets: Green Lipped Mussel and Bone, Joint, & Immune Health. 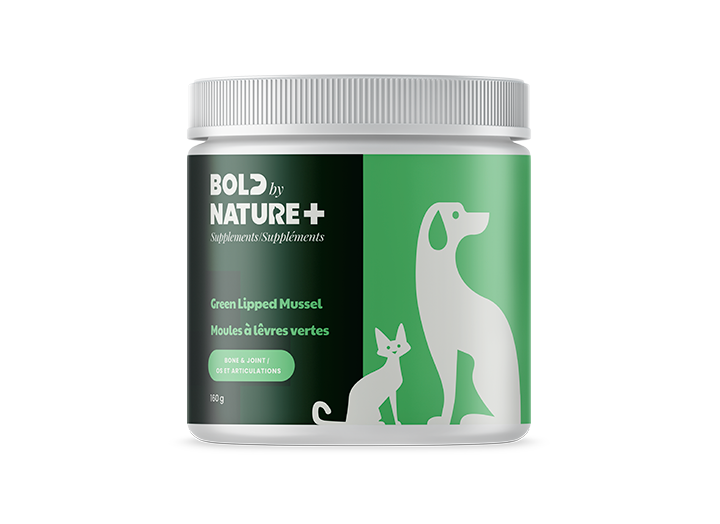 Our Green Lipped Mussel pet supplement is a wonderful source of naturally occurring glucosamine, chondroitin, Omega 3 and beneficial minerals to help support joint health, mobility, and function. Since Omega 3 fatty acids and chondroitin are natural anti-inflammatory nutrients, they are known to reduce pain in the joints of those who suffer from arthritis and other joint pains.

This is another great choice for pet supplements and covers all the bases: bone, joint, and immune health. These arthritis supplements contain a handful of great ingredients that support your cat with arthritis.

Glucosamine helps to repair joint cartilage and improve synovial fluid (the cushioning within the joint cavity). Improving joint health can slow the development of arthritis and reduce pain and stiffness and pain related to aging.

Chondroitin helps to prevent cartilage from breaking down. Its superior cartilage support reduces joint swelling and joint degradation. It also contains nutrients key to the development of new, healthy cartilage.

Curcumin, the active ingredient within Turmeric, acts as a powerful anti-inflammatory and antioxidant. When it is coupled with black pepper, the overall absorption of curcumin is improved. 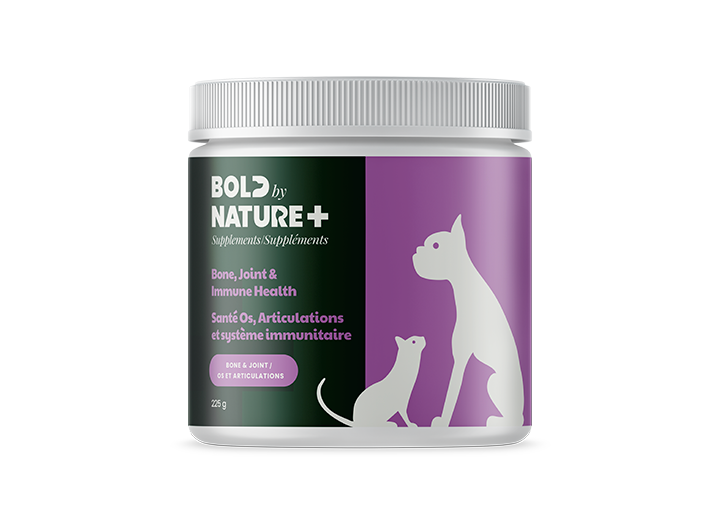 How often should I give my cat supplements for arthritis?

We recommend administering Bold by Nature supplements twice a day with food. The same dosage applies to cats and dogs according to their weight ranges. Mix with a meal or use a syringe to squirt into your pet’s mouth.

If your pet currently eats dry food, consider making the switch to a Bold by Nature raw pet food diet. Each raw recipe is formulated as nature intended but the benefits of raw cat food go beyond just the essential nutrients they contain. Since all pets are different, how much raw food to feed a cat will all depend on its weight and size. If you’re interested in transitioning your pet to raw food, feel free to explore what we think is the best raw cat food in Canada.

We always recommend checking with your veterinarian to determine if a supplement is an option for your cat. If your cat is receiving other drugs or medications, please ensure you are cautious with the supplements you offer them. How to help a cat with arthritis.

It’s not just supplements that can help your cat with arthritis. You, their beloved owner, can make their life a whole lot easier with a couple of minor home adjustments. These easy tips can help alleviate your cat’s pain.

Does Bold by Nature offer any other supplements?

Yes! We offer a variety of natural supplements that add a boost to your pet’s bowl. Our Bold by Nature+ Supplements are a terrific way to improve overall wellness, promote a healthier coat, and more.

Where can I get Bold by Nature products?

You can purchase Bold by Nature+ products at your local retailer. If you’re not sure where to buy raw pet food, you can use our location finder to explore retailers near you that carry Bold by Nature products. 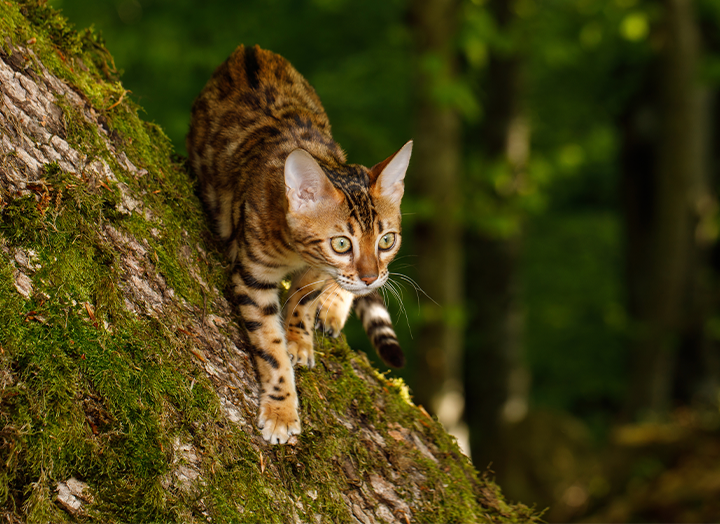